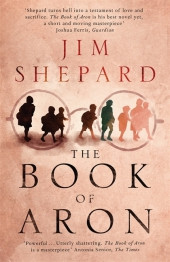 Beschreibung
Beschreibung
A lauded 'masterpiece' that tells with compassion and humour the story of Janusz Korczak, a hero... mehr
Menü schließen
Produktinformationen "The Book of Aron"
A lauded 'masterpiece' that tells with compassion and humour the story of Janusz Korczak, a hero of the Polish Jewish ghettoSHORTLISTED FOR THE CARNEGIE AWARD 'Powerful . . . shattering . . . a masterpiece' The Times 'Testament of love and sacrifice . . . a masterpiece' Joshua Ferris, Guardian 'Transcendent and timeless . . . masterpiece' Washington Post Aron is a nine-year-old Polish Jew, and a troublemaker. His mother despairs of him. His father beats him. He tries to be good. But in 1939, as the walls go up around the Jewish ghetto in Warsaw, as lice and typhus rage, families starve and fight, it is Aron who finds a way - however dangerous, however treacherous - to survive. It isn't until he lands at the feet of Janusz Korczak - orphanage director and reluctant hero - that he learns of something greater than survival. With new exclusive endmatter, featuring a biography of Korczak and questions for book clubs The Book of Aron is a novel of profound and delicate simplicity - passivity, almost - but one which calmly and indelibly delivers the bluntest of impacts. In other words, it's a knock-out (though you never saw it coming) Jim CraceJIM SHEPARD is the author of six previous novels and four story collections, including Like You'd Understand, Anyway, which was a finalist for the National Book Award and won The Story Prize. His short fiction has appeared in, among other magazines, The New Yorker, Harper's Magazine, McSweeney's, The Paris Review, The Atlantic, Esquire, Tin House, Granta, Zoetrope, Electric Literature, and Vice, and has often been selected for The Best American Short Stories and The PEN/O. Henry Prize Stories . He lives in Williamstown, Massachusetts, with his wife and three children, and teaches at Williams College.
Kunden kauften auch Kunden haben sich ebenfalls angesehen
Kunden kauften auch
Kunden haben sich ebenfalls angesehen
Zuletzt angesehen
Diese Website verwendet Cookies, um Ihnen die bestmögliche Funktionalität bieten zu können.
Einverstanden