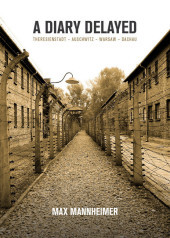 Beschreibung
Beschreibung
A Holocaust memoir by Max Mannheimer now available in English translation.I. My Youth in... mehr
Menü schließen
Produktinformationen "A Diary Delayed"
A Holocaust memoir by Max Mannheimer now available in English translation.I. My Youth in Neutitschein (Nový Jicín)Among the first memories I have that would carry meaning for my later life are those from the Christmas celebrations in the Neutitschein kindergarten. I didn't yet know anything about the difference between Jews and non-Jews. But I still thought it was unfair how the kindergarten teacher, dressed up as Santa Claus, distributed the presents. I would have liked to have the lovely rocking horse that another student received, but I was just given two carved wooden gymnasts that rolled from one end of a set of parallel bars to another. At home I complained to my mother about this injustice, and later when I began to understand the meaning of Christmas and the difference between Christians and Jews, I became more and more convinced that the Baby Jesus didn't like Jews.Only after I entered elementary school did I become aware that I was different from the others. At least I felt I was at a disadvantage not being able to participate in religion class like the other children, and I was not given any holy pictures in exchange for the collection of aluminum foil, which was presumably for the purpose of freeing black African slaves. I was very sad about this and only took comfort when Frau Mandl, the widow of Neutitschein's rabbi, explained to me that Jews had our own history, which was much older. I always listened attentively to these stories from biblical history and was convinced that the local priest, whom I also greeted with "Praise be to Jesus Christ" just like all the other children, did not know such lovely stories. In addition the Christian children didn't receive sweets like I did during their religion class, though only in exchange for good behavior.My parents met each other in the last year of the war. My mother worked the counter at my uncle's butcher shop. Uncle Jakob was the oldest of fourteen siblings; my mother, Margarethe, was the youngest. My parents married on March 25, 1919. My mother's dowry consisted of old-fashioned furniture with a ton of decorations. The wedding itself was financed by my uncle, which included arranging a tuxedo for my father.My father leased an inn at Landstrasse, No. 20 in Neutitschein, which belonged to the family Huppert, and I was born one year later in the room next to the inn's parlor. My brother Erich was born in 1921, in 1923 Ernst, 1925 Edgar, and in 1927 my sister Käthe.My first word wasn't "Papa" or "Mama," but rather "Auto." A fascination with four-wheeled transportation would never leave me.My father had little time for us kids and that's why I always appreciated it when he told us stories. Above all I was impressed by his depiction of an encounter with a good friend whom my father held in the highest esteem above all people because of his faithfulness. It was 1915. The second year of the war. My father's regiment was stationed in Galicia. It was nighttime. My father was standing guard. He was speaking with another soldier. Suddenly he heard a horse neighing that gradually became louder. My father approached and recognized the horse as the one that had pulled the delivery wagon he drove for his uncle's grocery store in Witkowitz. The story of this encounter pleased me so much that my father had to tell it over and over.My siblings and I were proud of a friendship our father had with a Jewish train conductor by the name of Allerhand. We got to meet him once. His pocket watch, which hung from a long, heavy chain, fascinated us above all else. Its hands reliably indicated the departure of the train, and in our minds it was as if the watch had the power to set the train in motion.From my father's youth I can only recount that at the age of twelve he began a sales apprenticeship with his uncle Adolf Guttmann and that he passionately loved to dance; so passionately that he once danced through the night three nights in a row while
Kunden kauften auch Kunden haben sich ebenfalls angesehen
Kunden kauften auch
Kunden haben sich ebenfalls angesehen
Code Name Madeleine Magida, Arthur
24,00 € *
4321 Auster, Paul
9,95 € *
HaLeila hagadol schel Lon-Lon. Lon-Lon's Big Night Leshem-Pelly, Miri
17,95 € *
All That I Am Funder, Anna
11,95 € *
Zuletzt angesehen
Diese Website benutzt Cookies, die für den technischen Betrieb der Website erforderlich sind und stets gesetzt werden. Andere Cookies, die den Komfort bei Benutzung dieser Website erhöhen, der Direktwerbung dienen oder die Interaktion mit anderen Websites und sozialen Netzwerken vereinfachen sollen, werden nur mit Ihrer Zustimmung gesetzt.
Ablehnen Alle akzeptieren Konfigurieren