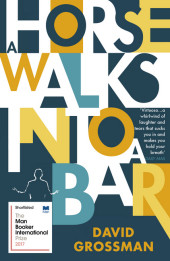 Beschreibung
Beschreibung
One of the world's great writers venturing into exciting new territory - a heartbreaking,... mehr
Menü schließen
Produktinformationen "A Horse Walks into a Bar"
One of the world's great writers venturing into exciting new territory - a heartbreaking, visceral novel about a stand-up comedianWINNER OF THE INTERNATIONAL MAN BOOKER PRIZE 2017The setting is a comedy club in a small Israeli town. An audience that has come expecting an evening of amusement instead sees a comedian falling apart on stage; an act of disintegration, a man crumbling, as a matter of choice, before their eyes. They could get up and leave, or boo and whistle and drive him from the stage, if they were not so drawn to glimpse his personal hell. Dovaleh G, a veteran stand-up comic - charming, erratic, repellent - exposes a wound he has been living with for years: a fateful and gruesome choice he had to make between the two people who were dearest to him.A Horse Walks into a Bar is a shocking and breathtaking read. Betrayals between lovers, the treachery of friends, guilt demanding redress. Flaying alive both himself and the people watching him, Dovaleh G provokes both revulsion and empathy from an audience that doesn't know whether to laugh or cry - and all this in the presence of a former childhood friend who is trying to understand why he's been summoned to this performance."Unrelentingly claustrophobic... The violence that A Horse Walks Into A Bar explores is more private and intimate. Its central interest is not the vicious treatment of vulnerable others but the cruelty that wells up within families, circulates like a poison in tight-knit groups, and finally turns inward against the self... Strategic weaving together of manic humour and tears... Searing and poignant ." Stephen Greenblatt New York Review of Books
Kunden kauften auch Kunden haben sich ebenfalls angesehen
Kunden kauften auch
Kunden haben sich ebenfalls angesehen
Zuletzt angesehen
Diese Website verwendet Cookies, um Ihnen die bestmögliche Funktionalität bieten zu können.
Einverstanden