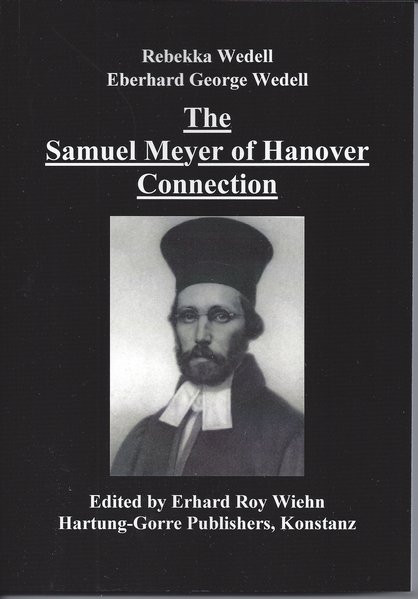 Beschreibung
Beschreibung
This book is about family connections, to the past, in the present and into the future. At the... mehr
Menü schließen
Produktinformationen "The Samuel Meyer of Hanover Connection"
This book is about family connections, to the past, in the present and into the future. At the centre of this family are Landrabbiner Samuel Meyer and his wife Lina, nee Sieskind, who are the great-grandparents of my father, Eberhard George Wedell. They lived in Hanover in the mid-nineteenth century and had fifteen children whose descendants are, today, spread across the globe – living in Europe, North and South America and Israel.
At the same time, the significance of this book extends beyond the framework of one particular family and its history. It has a role to play in re-connecting the Meyer family with the city of Hanover, which has, in turn, made an important contribution to the book – giving access to the city's archive material, the Erinnerungsschrift of 1919, as well as having commissioned historical research into particular areas relevant to the Meyer family e.g. the Landrabbinat of Hanover, and Judenzählung from the University of Hanover.
One interesting piece of preparing this book has been to work the different kinds of source material into one meaningful whole. We hope that we have been more or less successful in this.
My father tells me that he first had the idea for this book at the 90th birthday celebration of his cousin, Klaus Meyer, in 2003, which took place on a Thames riverboat in London.
Klaus was both a Wedell and a Meyer. His mother was Lily Wedell, my father's aunt, who married her uncle, Jacob Meyer, the brother of their grandmother, Ida Wedell, nee Meyer. Marriage between family relations was not uncommon in that era. As such Klaus straddled two generations – both a grandson, and, like Eberhard, a great-grandson, of Samuel and Lina. It meant that he had connections with branches of the Meyer family that were unknown to my father.
Standing on the deck of that boat on a sunny July day in 2003, there was an assortment of relatives across several generations, all descended from Samuel and Lina. It was here that Eberhard George met, for the first time, other Meyer descendants whose families had settled in England, as well as relatives whose families had emigrated to Brazil, the USA and Israel.
Many of the younger relatives probably knew little if anything about the origins of their shared family connection. It presented itself as an interesting project to find out what became of Samuel and Lina's descendants, to see how widely this web of relatives might extend, and in doing so the intention was to offer present and future generations the possibility for exploring their connections, should they wish to do so.
In this book, we have the opportunity to listen to the voices of our ancestors speaking directly to us, through their sermons, diary entries, polemic writing, and family anecdotes. The material collated here derives from a range of different sources:

Chapters 1 and 2 draw on existing genealogical research and family documentation that set the Meyer and Sieskind families within a historical context as well-established families of German-Jewry, that can be traced back at least to the early 18th century; and present a picture of Samuel Meyer's work as Landrabbiner, living through times of political change, both for Germans and for his Jewish communities.
We are much indebted to Klaus Oliven, a great-grandson of Samuel's brother, Louis, for giving us access to his book My Family History published in 2001; it gives a fascinating account of the Meyer family, and documents its extensive historical connections.

Chapters 3 and 5 consist of family reminiscences and accounts of the children of Lina and Samuel, thirteen of whom survived into adulthood. In Chapter 3, the memories of "Life in Escherstrasse," by "Tante Becca" conjure up the warm and vibrant home life of Samuel and Lina. Other contributions have come from relatives who still knew that generation, but, inevitably, the accounts that we have vary both in the extent and kind of information; and we would be delighted to hear from anyone who can add to them.

In Chapters 4 and 6, we have brought together family documents, archive material and academic research connected to two important historical events, particularly relevant to Samuel Meyer and his family. These events draw an arc between two significant points in German-Jewish history: the first being the abolition of the Dual Tithe in 1850, one of the important stepping-stones towards Jewish emancipation; the second concerning the politically controversial 'Jewish Census' (Judenzählung) of 1916, during the First World War, which reflected an upsurge in anti-Semitic rhetoric.
The original documents are in German, and written in Gothic script. We wanted to ensure that they should be accessible to as many readers as possible, and so we have had them translated. The specific legalese of the 'Dual Tithe' document has been a challenge to translate, but we believe it has been worthwhile. We include both language versions reflecting our bilingual heritage and to open up the material to as a wide a family membership as possible.

The appendix of this book contains a genealogy.
Unser Kommentar zu "The Samuel Meyer of Hanover Connection"